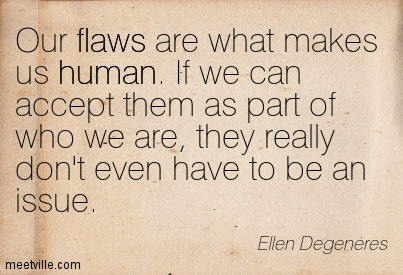 Let’s face it, we are not perfect. In fact we are far from it. And that includes our cognitive functions. Humans have flawed logic. We cannot think clearly most of the time. Our judgment is clouded by one thing or another. And you know what? At the center of it all, we are the main problem in the flaws of our thoughts.

Majority of the time we do not realize that we are the cause of our flaws. Or perhaps we just don’t want to admit that we are. Because admitting would be one step further from perfection. I know we all say that no one is perfect and that we aren’t trying to be, but I feel like deep down we are all attempting to be the most perfect versions of ourselves. I guess acknowledging that we strive towards an impossible goal would be like admitting our naivety.

I guess that is one of our flaws. We do not want to accept certain facts about ourselves. Facts that contradict our ‘perfect’ view of ourselves. Humans tend to ignore whatever goes against our versions of ourselves and this does not allow much room for self-improvement. The first step in overcoming a problem is admitting you have one, right? So how can we expect to alter ourselves for the better if we refuse to admit that we are flawed.

In my human growth class, we learned about how humans prefer a small immediate pay off rather than to wait for a larger pay off in the future. This is called hyperbolic discounting. That is flawed logic right there. We do not care for our future selves as much as we care for the here and now versions of ourselves. Perhaps we do not feel the need to care for the future us because we want to live in the moment. We want a good life for the present. We want immediate rewards and immediate gratifications because we never know what could happen in the future, so why count on the payoff in the long run if we may actually never get there. This could be in part due to our laziness because counting on a future requires thought and planning. Maybe it is because we value our future selves less because they do not seem quite as real as the present selves. Or perhaps it is our inability to be certain of the future which hinders our logical reasoning.

Uncertainty is a scary thing. Everyone is afraid of the unknown. Even the mere possibility of not knowing what will happen produces an instant undesirable feeling somewhere deep inside. For some reason incertitude makes us feel extremely uncomfortable, even more uncomfortable than knowing that something negative will happen. I cannot explain why we fear the unknown so much, but if you just don’t think about it everything feels a little better.

Another speck in our otherwise seemingly flawless thought process would be the gamblers fallacy. Humans do not understand probability as well as we like to believe we do. It is somewhat similar to uncertainty. We are not confident about the outcome, so we hope for the best and try to forget that there is always a negative side to every situation.

People believe in another thing called hope. We all hope for the favourable outcome and past events cloud our judgement of future events. We think that just because something happened so many times in the past, what are the odds that it will happen again? Or in case it is something positive we believe that it will reoccur or that somehow it is more likely to happen because we so desperately want it to happen. Like playing the lottery. We know the chances of winning are slim next to none, yet our the hope in a favourable outcome and the desire for a better life overrides our reasoning and proper judgment and we end up playing over and over again. Each time believing that our odds are somehow better than the first time. Each time finding a reason to justify our belief in the increased odds, like looking for a story online about someone who has won or talking to someone you know about a friend of a friend of a friend who knows a friend of a friend of someone who won. Like knowing about the one in a million lucky duck who happened to win increases your chances.

We humans are peculiar creatures who tend to avoid blaming ourselves for our flaws. Who tend to have difficulty accepting facts threatening our self-images. Who fear the future and the unknown. Who believe in hope and desire. Who have trouble with figuring out probability. Who allow our clear mental states to be shadowed with doubt, desire and dreams. We are flawed, there is no doubt about it, but we are human and accepting imperfection is what being human is all about.
Posted by Unknown at 02:57